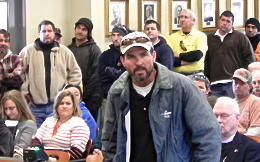 Watermen and boat builders turned out in force Monday to keep a spotlight on Oregon Inlet and urge Dare County commissioners to lead a unified effort to open the channel back up for commerce.

Two of the six remaining local boat builders warned that the shallow channel is not just a problem for trawlers that need deeper water.

They told the Board of Commissioners that it has added another hurdle to a slow economy, higher taxes on their wealthier customers and new health-care laws.

Storms have dumped sand into the channel to the point that it is unusable, sometimes even for the Coast Guard.

Bayliss said he closed up shop Monday so that all 58 of his employees could attend the meeting. More than 150 commercial fishermen, boatyard workers and their families filled the meeting room and spilled into the foyer.

“I’m starting to worry,” Bayliss said. “I’m wondering if we should start to look at relocating. Should we move to another state? I don’t know, but we need your help.”

Paul Spencer of Spencer Yachts said the jobs of his 120 employees representing a $100,000-a-week payroll are at risk.

“It’s no longer an emergency,” he said. “We have a crisis on our hands.”

“I don’t have a boat in my yard because they will not come into Oregon Inlet,” he said.

Boat building grew to as many as 17 companies on the promise that the U.S. Army Corps of Engineers would keep the federal channel open with dredging as an alternative to jetties, which had been studied for many years.

About $43 million in state and local taxes and the same amount in federal taxes could be realized annually from a functioning channel, Bayliss said.

About $10 to $15 million would be needed each year to maintain depths of 12 to 14 feet. In recent months, depths under the navigation span have been as little as 2 feet, but generally range from 4 to 6 feet.

“In the private sector, in my view, that’s a heck of a good investment,” he said.

But only $1 million has been proposed for the 2013 federal budget. More can be freed up by moving corps money around and the state now has an agreement in place that allows the North Carolina Department of Transportation to pay the corps to do the work.

In addition, the second part of the Hurricane Sandy relief bill would provide $9 million for Oregon Inlet work and another $2 million for the Hatteras ferry channel, according to U.S. Sen. Kay Hagan, D-N.C.

Hagan spokeswoman Hannah Smith said the $61 billion bill was split in two, with the first part containing $9.7 billion passed by Congress last week. But that only provided money for the federal flood insurance program.

Money for the Outer Banks would come from a second bill of $51 billion, which has been criticized for including projects not related to Hurricane Sandy. The outcome will not be known for a few weeks, Smith said.

At Monday’s meeting, Republican leader Mattie Lawson read a statement from the area’s new state Sen. Bill Cook, a Republican who said he would advocate for construction of a terminal groin, or jetty, on the north side of the inlet.

A spit from Bodie island has encroached from the north, squeezing the channel too close to shore. If the replacement for the Bonner Bridge is built, the navigation span would be moved farther south, where the water is up to 40-feet deep.

The board has scheduled a special meeting to discuss Oregon Inlet next Tuesday, Jan. 15 at 5 p.m. in Room 168 of the Administration Building.

Meanwhile, Chairman Warren Judge urged the speakers to take their message to the local Congressional delegation. He added that another risk, besides lost business, is a natural one.

“There’s two fears,” he said. “If Oregon Inlet fills up, one, we lose all these careers you’re talking about, all these businesses. But guess what? Mother Nature will blow out another inlet someplace.”