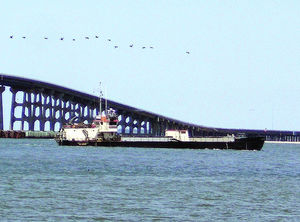 Following numerous efforts by Dare County to secure funding for ongoing dredging of Oregon Inlet, several funding sources are now emerging, with at least one securely in place as a funding contingency of last resort.

County leaders have agreed that approximately $7.2 million is required annually for “proactive” dredging that will keep the inlets open continuously.

On June 25, the Dare County Tourism Board (DCTB) voted unanimously to approve a request by Dare Board of Commissioners Chairman Bob Woodard for a $1 million grant “for much needed maintenance of Dare County’s inlets.”

The request, made in a letter dated June 4 and written “on behalf of the Dare County Board of Commissioners,” stated that the “one-time request for the upcoming fiscal year would be used exclusively for inlet maintenance and issued on a reimbursement basis throughout the fiscal year.”

The DCTB steering committee had previously recommended that the full board approve the grant. At the June 25 meeting, Vice Chair Susie Walters declared, “I believe we can set aside this million dollars in a line item within our budget. We will move some funding around and create that line item.”

Responding to a question from board member Leo Holland on the request’s possible effect on the DCTB’s finances, Outer Banks Visitors Bureau Executive Director Lee Nettles reviewed plans to “draw down” $650,000 from the Green Space/Other Space grant line item, $250,000 from the Short Term Restricted Fund Grants and $100,000 from the Infrastructure line item.

Nettles also confirmed that the one-time request for funds would be used for both Hatteras and Oregon Inlets, and that the emergency dredging in the past few months was funded with the

previous DCTB grant of $300,000 approved in January, along with $1.2 million secured in February by Congressman Walter Jones from the Army Corps of Engineers.

Board of Commissioners Vice Chairman Wally Overman, who serves on the DCTB, added that the $300,000 grant was also matched by state funds. “There is still a balance from that, albeit very small,” Overman said. “That is what has been used for all this to open up the inlet and to knock the ‘knob’ off the shoaling that was created just outside the northeast side of the span recently when the Merritt came back.

“So far, with the winds changing, we expect it to hold, and then we can get started on the proactive dredging as soon as the legislature finishes up their budget.”

A new Memorandum of Agreement (MOA) between the county, the state and the corps cannot be finalized until guaranteed funding is set in place by the legislature providing for a separate Oregon Inlet dredging fund.

But County Manager Bobby Outten told the Sentinel that the availability of these funds for inlet dredging is still contingent on several factors.

“When we close the books on the fiscal year 2015 at the end of June, we expect about $1.25 million left over as a surplus,” Outten said. “The one million dollar transfer from the Beach Nourishment Fund is based on legislation [allowing the county to use up to $3 million in occupancy tax funds for waterway maintenance] that still needs to be approved by the state legislature. And the old EMS helicopter will be put up for sale in September, after we have purchased the new helicopter. We anticipate having $750,000 available from that sale, but it could take a while — perhaps until next spring — before that is sold.”

Back on May 19, the North Carolina Senate passed a bill sponsored by State Senator Bill Cook and other senators reserving $4 million for dredging Oregon Inlet as long as it is matched by “non-state dollars.” The Senate passed its budget on June 18 and it is now in the preliminary stages of preparation for a Senate-House conference committee, which will work on finalizing a budget acceptable to both houses of the state legislature.

Aside from the $4 million set aside for dredging Oregon Inlet, the Senate budget also appropriates $900,000 to the Department of Administration to begin work on finding a “long term solution” for the inlet and requests the department to negotiate with the federal government to acquire the federally owned property needed to manage deep draft navigation channels at the Morehead City State Port facilities in trade for state-owned real property; establishes a Deep Draft Navigation Channel Dredging and Maintenance Fund; and authorizes the Dare Board of Commissioners to use up to $3 million each year from its occupancy tax collections for inlet and waterway maintenance, subject to a “sunset” clause after five years.

At this point, everyone has to simply wait for the legislative process in Raleigh to take its course. Cook aide Jordan Hennessy noted that, while the conference work is just getting started, members of the Senate are hopeful that much of the Senate-approved budget will be adopted in the final budget.

“We’re very grateful for Senator Cook’s work on this and we’ll be interested to see what the House does and if they’re on board,” added Chairman Woodard.